Enjoy an amazing and complete Galapagos experience on board one of the most renowned Luxury class cruises sailing the Archipelago. You will enjoy 9 different Islands filled with wildlife during a fantastic 8-days cruise between the Central and Southern Islands, satisfaction is guaranteed. 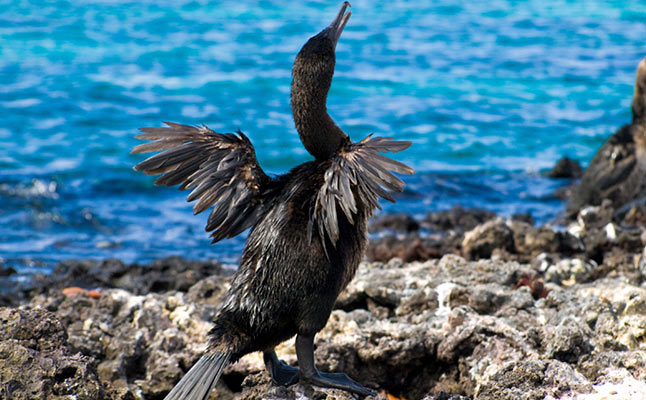 Arrival to Baltra Airport where the yacht’s Guide will be expecting you to take you to the Catamaran to start your amazing journey. Sail to Bachas Beach, located on the north shore of Santa Cruz. One of the few remnants of the U.S. World War II presence in the Galapagos, a floating pier, can be seen here. You may also see flamingos, Sally Lightfoot crabs, hermit crabs, black necked stilts, and whimbrels. Sea turtles also nest off the beach.

This white sand coral beach heads a half mile trail (0.75km) that winds through mangroves filled with land birds. Nazca boobies, red-footed boobies, and swallow-tailed gulls can be spotted here. Further down the path are tidal pools where sea lions swim playfully. At the end is a spectacular view off a cliff.

In the morning, you will head to South Plaza Island. This small island with steep cliffs was formed by rising lava and is now covered by Opuntia cacti. It is home to one of the largest sea lion colonies as well as colorful yellow and red land iguanas and you will also spot Nazca-Boobies and Swallowed-tailed Gulls. The most characteristic plant is Sesuvium. During the rainy season its color is a greenish to yellowish tone and in the dry season (end of June through January) a bright red.

Santa Fe is home to the small picturesque bay and anchorage on the island’s northeast coast. The bay has two visitor trails, one leading to a scenic viewpoint atop a cliff, and the other spanning from a small beach to a tall prickly pear cactus forest.

Pitt Point is situated on the northeastern tip of the island, hosts frigate birds, storm petrels, and all three types of boobies: Blue-footed, Nazca and Red-footed. A steep trail goes up a cliff and through a ravine leading visitors to an area with an abundance of birds and sea-lion colony. This site is also great for snorkeling!

Located on the northern coast, this eroded hill and its surroundings present one of the most picturesque beaches in the Galapagos with its white powdery sand and the abundance of animals. Wildlife includes sea turtles, rays, and various types of booby birds. The clear water provides an excellent opportunity for enjoying swimming and snorkeling with playful sea-lions and tropical fish.

This is a new visitor site in the northeast part of San Cristobal Island and can now be reached in roughly one hour by road from Puerto Baquerizo Moreno. In the Breeding Center, you will be able to admire the hatchling turtles from their birth until they are 120 days old when the grown turtles are taken to their natural habit.

After Lunch, visit to Kicker Rock, this striking rock formation is located a couple hours off the western shore of San Cristobal. Jutting out of the water, the rocks stand vertically at hundreds of feet above the ocean divided by a small channel. Although there are no landing areas, kayaking and scuba diving allow visitors to spot a variety of marine life.

This area is great for spotting blue-footed boobies, albatrosses and Nazca boobies. A beautiful site on the ocean front, the large waved albatrosses use the cliff as a launching pad. The famous attraction is the magnificent blowhole, spurting water high into the air. This site presents wonderful photograph opportunities.

Gardner Bay, on the eastern side of the island, is the breeding site of nearly all of the world´s 12,000 pairs of waved albatrosses. It has an ample white sandy beach with a myriad of sea lions, perfect for relaxing. Its rocky shores make this site a great place for diving and snorkeling.

In the 18th century whalers passing through the islands placed a wooden barrel on Floreana Island for use as an unofficial mail box. The tradition continues today as visitors leave addressed postcards in the barrel and sort through left mail to deliver at home.

Baroness Viewpoint is a fantastic place to absorb the environment of the Galapagos. Once inhabited by an indulgent baroness and her three lovers, the history of this island is intriguing. The legends about this baroness are associated with a fascinating murder mystery. There are easy trails in this area for exploring the flora and fauna of Floreana.

This site hosts a large flamingo lagoon where other birds such as common stilts and white-cheeked pintails can also be seen. The beaches on this island are distinct: The “Green Beach” named so due to its green color, which comes from a high percentage of olivine crystals in the sand, and the “Four Sand Beach” composed of white coral.

The Champion Island, named after the whaler Andrew Champion, is a small island located just offshore Floreana Island in the southern part of the Archipelago, considered as one of the most beautiful places on Galapagos for all snorkeling and diving fans and an excellent opportunity for dolphin watching.

Los Gemelos, or the Twin Craters, are located opposite each other on both sides of the road leading from Puerto Ayora to Baltra. The name is only figurative; not real craters, these formations were created by the collapse of surface material in underground fissures and chambers. The view is breathtaking.