Enjoy the enchanted Galapagos by cruising on board an exclusive Luxury class Catamaran from San Cristobal to the Southern Islands and visit the most marvelous sites in Española and Floreana including Gardner Bay and Cormorant Point on a short 4-days Luxury cruise. 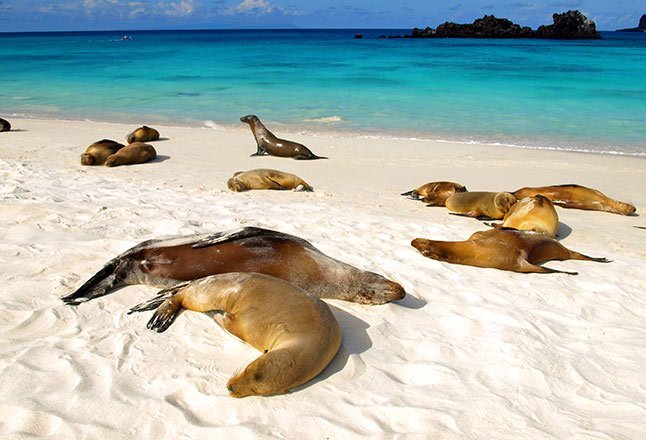 Arrival from Mainland to San Cristobal Island. Transfer to the M/C Cormorant. After Lunch, visit to Kicker Rock, this striking rock formation is located a couple hours off the western shore of San Cristobal. Jutting out of the water, the rocks stand vertically at hundreds of feet above the ocean divided by a small channel. Although there are no landing areas, kayaking and scuba diving allow visitors to spot a variety of marine life.

This area is great for spotting blue-footed boobies, albatrosses and Nazca boobies. A beautiful site on the ocean front, the large waved albatrosses use the cliff as a launching pad. The famous attraction is the magnificent blowhole, spurting water high into the air. This site presents wonderful photograph opportunities.

Gardner Bay, on the eastern side of the island, is the breeding site of nearly all of the world´s 12,000 pairs of waved albatrosses. It has an ample white sandy beach with a myriad of sea lions, perfect for relaxing. Its rocky shores make this site a great place for diving and snorkeling.

In the 18th century whalers passing through the islands placed a wooden barrel on Floreana Island for use as an unofficial mail box. The tradition continues today as visitors leave addressed postcards in the barrel and sort through left mail to deliver at home.

Baroness Viewing Point: Baroness Viewpoint is a fantastic place to absorb the environment of the Galapagos. Once inhabited by an indulgent baroness and her three lovers, the history of this island is intriguing. The legends about this baroness are associated with a fascinating murder mystery. There are easy trails in this area for exploring the flora and fauna of Floreana.

This site hosts a large flamingo lagoon where other birds such as common stilts and white-cheeked pintails can also be seen. The beaches on this island are distinct: The “Green Beach” named so due to its green color, which comes from a high percentage of olivine crystals in the sand, and the “Four Sand Beach” composed of white coral.

Champion Islet: The Champion Island, named after the whaler Andrew Champion, is a small island located just offshore Floreana Island in the southern part of the Archipelago, considered as one of the most beautiful places on Galapagos for all snorkeling and diving fans and an excellent opportunity for dolphin watching.

Los Gemelos, or the Twin Craters, are located opposite each other on both sides of the road leading from Puerto Ayora to Baltra. The name is only figurative; not real craters, these formations were created by the collapse of surface material in underground fissures and chambers. The view is breathtaking.