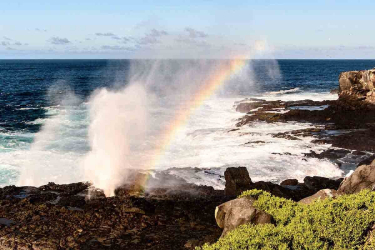 AM – Arrival at Baltra Airport (GPS)
Upon arrival at Baltra Airport, travellers pass through an airport inspection point to make sure that no foreign plants or animals are introduced to the islands, and to pay the park entrance fee of $100 (unless it has been prepaid). A guide will meet you, help you collect your luggage, and escort you on a short bus ride to the harbour.

The peninsula of Cormorant Point forms the extreme north cape of Floreana, which formed by numbers of smaller volcanic cones, covered by tropical dry forest (palo santo). At the landing beach, you will be welcomed by a small Galapagos sea lion colony. The green sand on this beach contains a high percentage of glassy olivine crystals which have been blown out by the surrounding tuff cones. The ‘flour sand’ beach on the southern side of the peninsula is formed of even finer white coral sand which feels very smooth on your feet. Parrotfish have pulverised it, grinding the calcareous skeletons of living coral. You can spot schools of stingrays who love using the sandy bottom to hide themselves. During the first months of the year, Pacific green turtles come ashore to bury their eggs.

While having lunch we will navigate back to Post Office Bay (about 1hr).

Post your holiday greetings in the historical barrel, one of three nearby visitor’s sites on Floreana’s north coast (short displacement, wet landing) and relax. Besides Galapagos sea lions, Pacific green turtles and golden cownose rays you might spot Galapagos penguins! This is the only place in the south-eastern archipelago where penguins reside. Explore by inflatable dinghy – or in your own pace by sea-kayak – another submerged crater rim around the bay of Baroness Lookout. Climb the miniature basaltic cone of Baroness Lookout and take in the paradisiacal coastal views. This viewpoint was the favourite spot of one of Floreana’s first colonists, the eccentric Baroness and self-proclaimed ‘Empress of Galapagos’ Eloisa von Wagner Bosquet, who even built her house a few metres behind. She and one of herlovers were the first in a series of mysterious disappearings and deaths in the 1930s.

The striking white beach at Gardner Bay is an important breeding site for Pacific green turtles. However, without doubt its main attraction is the Galapagos sea lion colony. Females stay year round in this nursery, suckling their pups until they are three years old, although they start to fish at five months. During the breeding and mating season, the colony becomes even bigger.

Huge ocean waves crash onto the southern basaltic cliffs of Suarez Point, forming a spectacular blowhole, where the water sprays metres high into the air (depending on the season, the tide and how strongly the sea breeze pushes the waves). Take your time for a meditative break in silence on this emblematic viewpoint, and convert this unforgettable moment in a lifetime experience.

Two wind sculptured tuff cones at Pitt Point make up the extreme eastern end of San Cristóbal, and thus, the archipelago as well. These cliffs were the first sight of land when HMS Beagle and Charles Darwin arrived on the 15th of September, 1835. On the small green sand beach, you will be welcomed by a group of barking Galapagos sea lions. This is a bachelor colony, where males usually relax and prepare themselves for fighting and mating.

From the saltbush and spiny shrubs behind the beach, a trail leads up to an area of tropical dry forest vegetation: most of the year you can find leafless palo santo trees, yellow cordia shrubs, tiny prickly pear cacti and carpetweed that turns red in the dry season. After the steep climb through a gully to the clifftop, you can wander around the only colony in Galapagos that has all three species of boobies: blue-footed, red-footed and Nazca booby; as well as both species of frigate bird (great and magnificent), famous because of their scarlet balloon-sized pouches during mating season. Frigate birds attack returning boobies and conduct aerial battles rather than fishing for themselves.

The primary attraction of this site is the coral sand beach, an excellent place to swim and snorkel. Witch Hill is the remains of a tuff cone and one of the first sites visited by Charles Darwin. It has an impressive landscape, where it is often possible to see coastal and migratory birds, including pelicans, blue-footed boobies and swallow-tailed gulls; as well as sea lions and marine iguanas. At times, the lagoon is completely dry and deposits of salt can be found at the bottom. The people of Puerto Baquerizo Moreno used to use the lagoon as a salt mine.

The Lobos Islets beach harbours a colony of Galapagos sea lions. As in other colonies in the archipelago, you can approach nurturing females within a few metres. In the breeding season this colony is also visited by territorial males, defending and mating the harem on their part of the beach. This low islet is home to more than just Galapagos sea lions. Two other emblematic species breed here: male blue-footed boobies and great frigate birds who try to impress the females (and tourists) with clumsy dances, heaving their striking blue feet or blowing up their balloon-sized scarlet pouches. During the breeding season, the fluffy and hungry chicks cry for food, and when their wings get strong enough, they will learn to fly.

Assisted by the naturalist guide and some crewmembers, the dinghy will bring you and your luggage to the San Cristóbal Airport, where we will take the shuttle back to the airport.