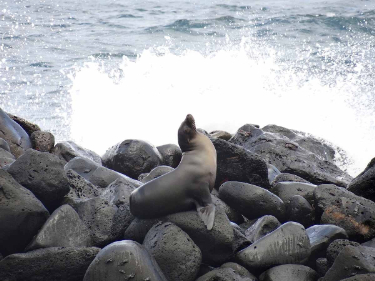 AM – Arrival at San Cristóbal Airport (SCY)
Upon arrival at the San Cristóbal Airport, travellers pass through an airport inspection point to make sure that no foreign plants or animals are introduced to the islands, and to pay the park entrance fee of $100 (unless it has been prepaid). A guide will meet you, help you collect your luggage, and escort you on a short bus ride to the harbour.

PM – Cerro Colorado (San Cristóbal)
Cerro Colorado Tortoises Protection and Growing Centre, approximately 40 minutes by bus from the southeast of the island, was built to improve the status of the population of the island tortoises. The centre includes a large corral, a Visitor Centre, breeding centre and an interpretative trail. Along this trail, it is possible to see different species of native and endemic plants as well as birds like the San Cristóbal mockingbird, yellow warblers, many species of finches and the Galapagos  flycatcher.

South Plaza is located to the east of Santa Cruz Island, and forms part of a pair of islands known as “Islas Plazas”.

Despite its small size, some of the most interesting and outstanding species of the Galapagos are found here. The Plazas land iguanas are smaller than their relatives on other islands. Throughout the island there are several hybrid iguanas, a result of crossing a marine iguana with a land iguana.

They are unique and can be recognised at first glance by their black/grey color, with a land iguana’s crest, but face and tail of the marine iguana. The big population of iguanas is due to the presence of tuna, their favourite food. Swallow tailed gulls nesting in the rugged cliffs are seen along with other seabirds as: audubon shearwaters, red-billed tropicbirds, frigate birds and brown pelicans.

Located in the southeastern part of the Galapagos, this island was formed from an uplift rather than being of volcanic origin, which is why it is mostly flat. There are some theories which claim that this could be the oldest island in the Archipelago. Santa Fe is home to a number of endemic species like the Galapagos Hawk, Galapagos snake, Galapagos mockingbird, rice rats and one of the two species of lands iguanas of the islands. After disembarking into the beautiful and clear waters you will be in contact with one of the many sea lion colonies. Along the trail many salt bushes can be seen as well as the giant prickly pear cactus – gigantism is a characteristic of oceanic islands. There are many possibilities to snorkel with playful sea lions and tropical fish.

Bottlenose dolphins frequently escort our passage to Champion Islet and you can see them from nearby jumping the wakes! Underwater, Galapagos sea lions are playful acrobats that become the number one attraction. There are also lots of reef fish, and perhaps a green Pacific turtle.

An inflatable dinghy ride along the shoreline of this islet offers sightings of lots of seabirds that are endemic to the archipelago, including Galapagos penguins, blue-footed boobies, magnificent frigate birds and red-billed tropicbirds, swallow-tailed gulls and lava herons.

A birdwatchers dream is to get a glimpse of the Charles mockingbird on top of prickly pear cacti. This mockingbird is a scientific and historic key species, because it put Darwin on track of his theory of ‘adaptive radiation’.

The Asylum of Peace Island is of historical interest for guests. This hike goes past a mesmerising cave and visits a fascinating freshwater spring. La Loberia beach is an ideal spot to enjoy the ocean, as well as the playful sea lions that reside there.

Although the great majority of Galapagos visitors come here to observe and appreciate natural wonders, it is also interesting to learn about how the protection and conservation of the islands are carried out.

The main attractions are the National Park information centre, the Van Staelen Exhibition Hall, the Breeding and Rearing Centre for young tortoises, and adult Galapagos tortoises in captivity.

“Tintoreras” are small islands in front of the Puerto Villamil coast. Here you can find herons on the lookout on mangrove branches, as well as Galapagos Penguins and sea lions that often pop out onto the shore. White-tipped reef sharks (in Spanish: Tintoreras) are common in the archipelago and are very commonly found resting in the shallow waters.

In the Arnaldo Tupiza Tortoise Breeding Centre you can see hundreds of giant Galapagos tortoises of all sizes. Vulnerable hatchlings are not gigantic at all, even smaller than the size of your hand! This project just outside Puerto Villamil was created to rescue the endangered populations of Isabela’s both southernmost volcanoes. From the almost incredible estimations of 250,000 giant tortoises in the 16th century, by the 1970s there were only about 3,000 individuals remaining. One thing becomes clear on your visit: it’s hard work to save these creatures from extinction by reproduction in captivity and repopulation. The good news is that these programmes are successful and have already saved several species from extinction so far.

By 2015 their number increased to about 32,000 in all the archipelago. Don’t forget to visit the native botanical garden of this breeding centre. It also attracts colourful songbirds such as yellow warblers, Darwin’s finches, Galapagos and vermillion flycatchers. Finally there is no greater counterpart to the cumbersome tortoises than the graceful American flamingos which frequently filter the saline waters of the adjacent lagoon for shrimp and algae. They are joined by a handful of species of aquatic and shore birds, from which some even migrate from Canada and Alaska.

Moreno Point is located on the north coast of Isabela Island, between the volcanos Sierra Negra and Cerro Azul. The trail runs along a solidified lava flow called “Pahohoe”, into a complex of coastal lagoons.  Its main attraction are several species of birds, which are found around the lakes and mangroves.

This is a marine visitor site, so the excursion has no landing point. Your zodiac ride starts with a visit to the Marielas islets where the largest and most important penguin colony reside in the Galapagos Islands. The excursion continues into the cove, surrounded by red mangroves where you can admire their red roots and green leaves. Here, you are able to observe sea turtles, flightless cormorants, spotted eagle rays, golden rays, brown pelicans and sea lions. Frequent visitors have been able to see Galapagos hawks soaring overhead with schools of pompano and dorado fish swimming down below.

A tour along the cliffs will give visitors a good chance to see the Galapagos penguin, the flightless cormorant and other seabirds. From the landing dock, it is about a 30-minute hike along the trail up to the top of the cliff from where you can view Darwin Lake, an uplifted lake saltier than the sea. You can also see several volcanoes from this location. Look carefully at the graffiti on the surrounding cliffs of the cove, done by pirates, whalers and buccaneers in past centuries!

Fernandina is the third largest island in the archipelago and has a single visitor site: Punta Espinoza, located at the northeastern tip of the island. Here, marine iguanas conglomerate in larger groups than on any other island. They bask around in the sand, swim near the shore and sometimes block the way at the landing dock. Among the unique species found here, we can find the flightless cormorant.

These two small beaches are found to the west of Turtle Cove. Their sand is made up of decomposed coral, which makes it white and soft, and a favourite nesting site for sea turtles. Behind one of the beaches there is a small blackish water lagoon, where it is occasionally possible to observe flamingos and other coastal birds, such as black-necked stilts and whimbrels. The other beach is longer, but it has two old barges that were abandoned during World War II, when USA used Baltra Island as a strategic point to protect the Panama Channel.

Transfer out to Baltra Airport (GPS)

Assisted by the naturalist guide and some crewmembers, the dinghy will bring you and your luggage to Baltra Airport, where we will take the shuttle back to the airport.