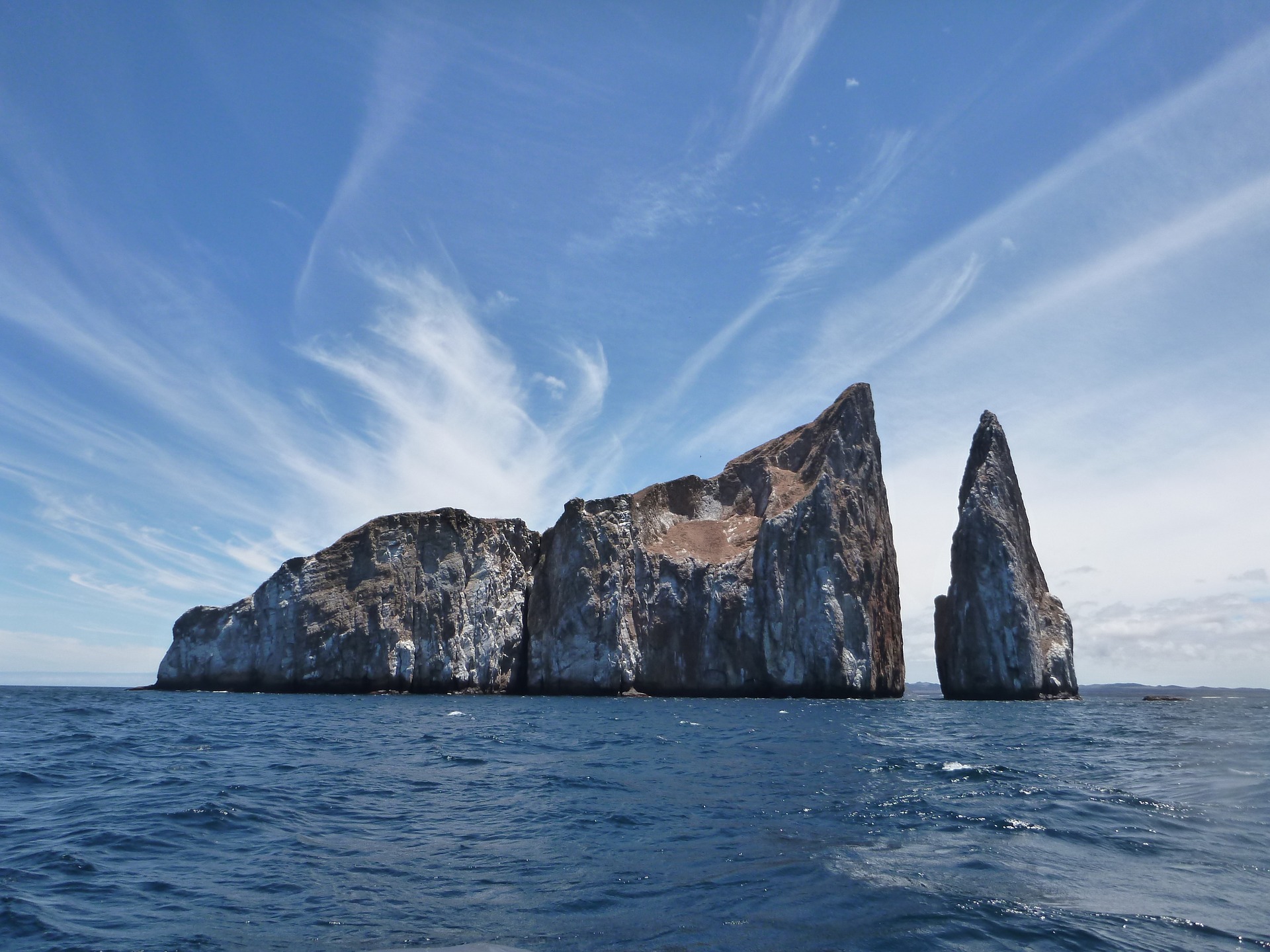 San Cristobal Island is the fifth largest island in the Galapagos and lies farthest East. It is where Darwin first landed back in 1835 and  where the first permanent settlements were founded. Today the main port Puerto Baquerizo Moreno is the capital of the Galapagos province and houses many government offices, the Ecuadorian Navy, and an airport with daily flights to the mainland of Ecuador. Conservation challenges the island faces include invasive plants like blackberry and guayaba and insects like the blackfly.

Lobos Island is an islet about an hour away from San Cristobal. Blue-footed boobies will nest here seasonally. In recent years frigate birds have begun to nest here. Sea lions are abundant, as well as marine iguanas. It is a very calm and tranquil site with beautiful views, including Kicker Rock off in the distance.

Kicker rock or León Dormido as it is called in Spanish is a huge structure formed of two eroded volcanic cones that tower over the sea at about 104 meters and sits in the middle of the open water. It is one of the most well-known landmarks in Galapagos with many popular sea birds that surround the area. This is also perhaps one of the best sites in the Galapagos see incredible underwater life.

Pitt Point on San Cristobal is on the easternmost side of the Galapagos Islands. It’s also one of the only places that red-footed boobies, blue-footed boobies, and Nazca’s can be found all at the same place. The visitor site is interesting as the formations of old volcanic rock are profoundly unique and the hike to the top of the site provides incredible views of the surrounding area.

Witch Hill is home to a popular beach in the Galapagos with powdery white sand and turquiose waters that are a joy to swim in and snorkel spotting the tropical fish benauth the surface. The occasional sea lion may stop by to swim with you or you’ll find them snoozing on the shore. On a panga ride you can explore the many crevices in the eroding rocks, leaving you in awe of the sheer power of erosion.

Floreana Island is one of the most interesting when it comes to human history. The first Galapagos resident was an Irishman who lived on  Floreana from 1807 to 1809. It is the site of the first post office within the islands created by whalers in the 1700’s. Later it became the first island to be colonized by Ecuadorians, but to this day is still very isolated. Surrounded by mystery, in the 1930’s various disappearances occurred and is thought to be because of tension between a baroness and her three servants who arrived after an already settled husband and wife, who gave birth to the first to be born in Galapagos and another couple of a doctor and female companion who lived of the land from their garden. The small population of today lives off the land with homegrown farms and gets their water from rain-filled ponds during the rainy season. There is one hotel with the only phone in the port of Velasco Ibarra where most residents live, the rest live up in the highlands. Transportation is limited and is only available every two weeks.

Cormorant Point is another fun and interesting visitor site. Two beaches can be visited and flamingoes can be seen wading through brackish lagoons looking for shrimp, which gives them their bright and vibrant colors. One of the beaches look green because of olivine crystals and the other is appropriately called Flour Beach a powdery white, made from fine pulverized coral.

Devil’s Crown is a visitor site that boasts the best snorkeling opportunities. Below the surface are amazing volcanic structures that have submerged over time. Hundreds of different colorful fish species can be found here among the coral reefs. Sharks, rays, sea turtles, hammer head sharks and sea lions are also common visitors. It is an underwater spectacle that cannot be missed.

Post Office Bay is a completely human influential site, Post Office Bay is the first official post office created by passing whalers in the 1700’s. To this day visitors continue the tradition as many leave addressed messages on post cards in the barrel to be sent by future visitors while picking up post cards left behind by previous visitors to send when they return home. It is a fun exchangeable activity many visitors enjoy.

On the northern part of the island, Baroness Lookout Point has a beautiful landscape and historic view. It was named after the supposed Austrian Baroness that was the subject of many mysterious disappearances and well-known stories of loathing by those on Floreana.

Black Turtle Cove is located on the north side of Santa Cruz Island and is only accessible by boat and with a guide. This shallow inlet is surrounded by mangroves and provides natural protection for a variety of marine life, attracting the vulnerable juveniles of many species. Below the surface of the water, you can see both black-tip and white-tip reef sharks, sea turtles, golden cow-nose rays, spotted eagle rays, and an occasional hammerhead shark. Pelicans and Boobies hunt here, diving gracefully into the water.

El Barranco is better known as Prince Phillip’s Steps, a steep and rocky path leads up to a cliff with a marvelous view. There is also a Palo Santa forest that is home to nesting red-footed boobies and other birds.

The Highlands of Santa Cruz is a very interesting site due to the rich wildlife, hills, ferns, volcanoes and lava tubes present. Exploring the lava tubes is a surreal and unique experience. Here you can see all the different agricultural zones that are present in the Galapagos in one place. The variety of birds makes this a bird watchers delight.

Mosquera Islet is located between the islands of Baltra and North Seymour. It is a reef of rocks and coral (the result of an uprising) and a great white sand beach. Its narrowest width reaches about 160 meters and has an estimated length of 600 meters. In most of the perimeter, there is a base of lava rocks, as evidence of the lava uprising, except in the southwest side where the landing occurs.