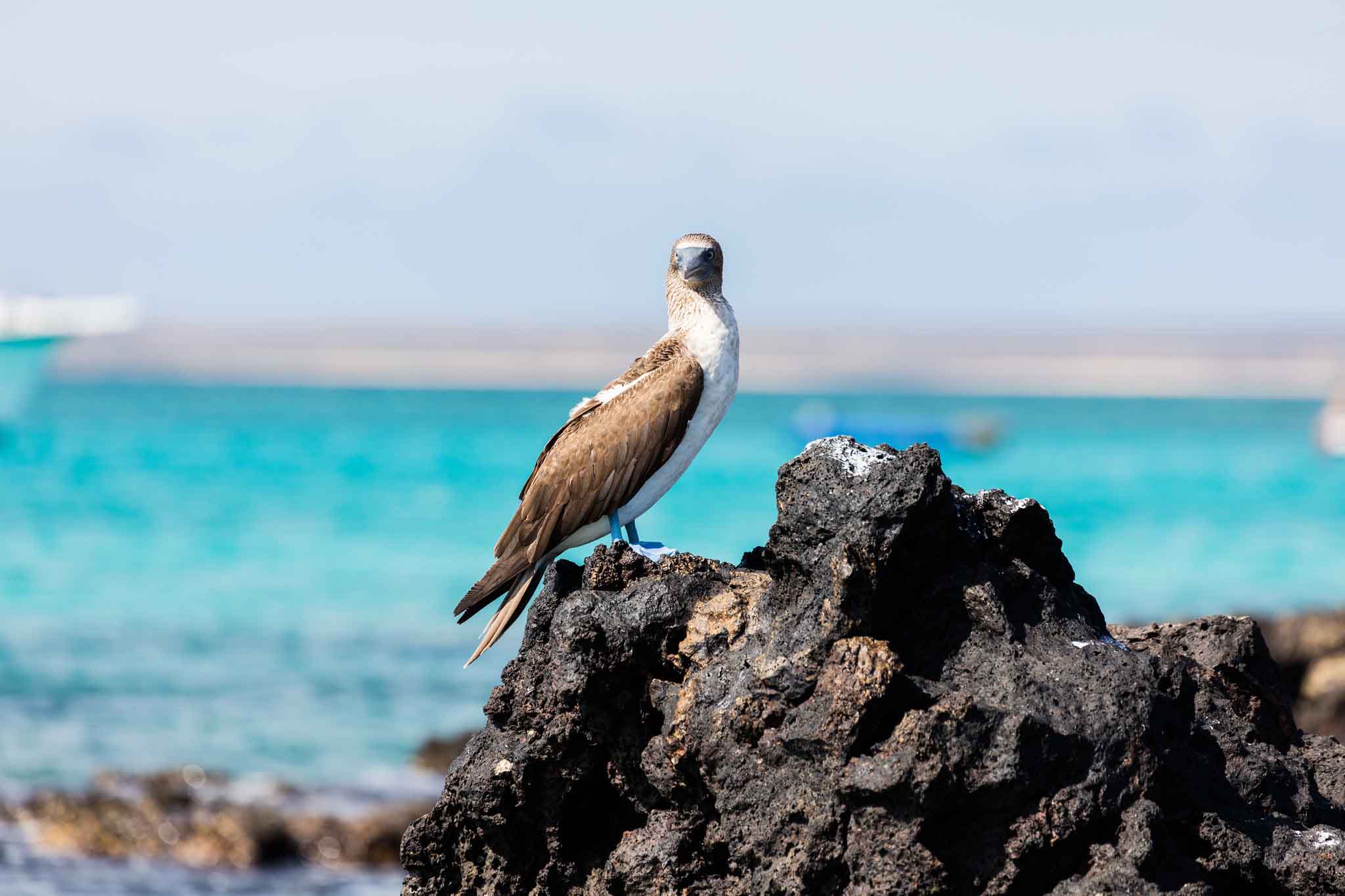 Isabela Island is the largest of all the Galapagos Islands, about 120 km long, and is peculiarly shaped like a sea-horse! It is one of the few  islands that are populated. The last census that was taken estimated about 2,200 people living on the Southern part of the Island. The island was formed by 6 different shield volcanoes from North to South that erupted continuously, eventually joining together to form on entire land mass. Of all the islands in the archipelago, Isabela is the most active with the latest eruption coming from Wolf Volcano in May of 2015. There are lots of unique wildlife on Isabela such as the pink iguana, and more wild tortoises than any other island with a different type of species near each of the 6 volcanoes.

On Vicente Roca Point the geological formations are simply outstanding and it is a great place to view various bird species such as blue-footed boobies, Nazca boobies, gulls, storm petrels, and brown noddy terns. Activities here are all done on the water by either dinghy or panga, or snorkeling. On this western part of the island the Cromwell Current provides cold water and many nutrients. Due to this it is possible to see various feeding frenzies of an assortment of animals such as whales, dolphins, sea lions, and marine birds diving. At times it may also be likely to see fur seals.

In Fernandina Island, no foreign species have ever invaded it and therefore it is one of the world’s most pristine island ecosystems. It is one of the most active islands and is the westernmost island in the archipelago. The volcano “La Cumbre” dominates the landscape with lava fields reaching the ocean. The Cromwell Current also flows on the west making the cold and nutrient-rich water an ideal habitat for the Galapagos Penguin and Flightless Cormorant that nests here.

Tagus Cove is located on the upper west part of the island and was named after and English war ship that used to pass the islands in the 1800’s. This was a famous spot for many pirates and sailors who have even left their names and the names of the ship inscribed on volcanic rock. There are many different characteristics of the island here from various volcanic activities such as large volcanic rocks or small little balls of petrified rain. On the hike the path leads to Darwin Lake with a tuff cone.

A bit more south of Tagus Cove is Urbina Bay. Urbina Bay is an interesting site due to the uplifts of the island caused by volcanic and tectonic activity. When it rose, so did the corals and reefs that were under the surface. You can still see them although they are beginning to deteriorate due to air exposure. There are chances of seeing giant tortoises, land iguanas, and more flightless cormorants near the coast.

A visitor site on the way down to the southern parts of Isabela Island is Elizabeth Bay. There are a series of islets, a lagoon and mangroves surrounding it. The mangroves provide a great place to observe many birds and at the lagoon, it is possible to see sea turtles resting and feeding.

On the South Western point of Isabela Island is Moreno Point. With striking black geological features, it is home to endemic species known only to the barren lava flows found here. Various activities are possible such as a hike, a panga ride to better see various seabirds, geological features, and snorkeling to view the vibrant underwater life.

Sierra Negra has two volcanoes located in the South of the Island and they are two of the oldest of all Isabela’s volcanoes. A hike will show different types of vegetation and geological zones and possibly inside the caldera where petrified lava is present. Volcano Chico is easier to reach and recent lava flows from the 70’s can even be walked on.

Isabela Breeding Center is named after Arnaldo Tupiza. It is another area where Galapagos Tortoises are bred in order to later be released into the wild.

Nowadays Santa Cruz is one of the most popular tourist sites. With a population of about 12,000 Galapagos natives, it has the longest paved road in the entire archipelago. One of the biggest conservation efforts is to eliminate all non-native plants and animals that are destroying native and endemic species on the island. There is no longer any volcanic activity but that does not mean there is no evidence. Santa Cruz means holy cross, but it’s English name comes from the British vessel – Indefatigable.

Charles Darwin Research Station conducts many different research projects and provides assistance to other researchers and governmental institutions and agencies, especially the Galapagos National Park. Many of the results are later published online, in magazines, and popular scientific journals. The research station also plays a big part in educating the community and public schools in Galapagos. There is also the longtime running Giant Tortoise restoration program that includes various stages of the giant tortoise from eggs, hatchlings and adults.